October 21..Join us for an evening of Poetry 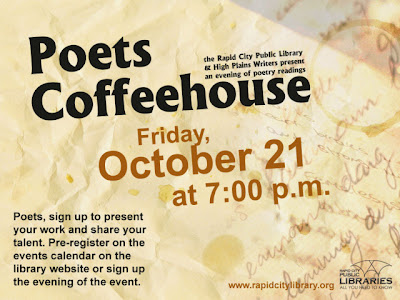 
Cells
by Anonymous
car lights his headlights he skids all over the ice
we sit and talk about the nature of radiohead
and working for 8.50 an hour and how
our bosses all suck
it seems honest
when you think about it.
i stop and stare and try not to pay attention
when my stomach crawls to my throat
this mornings breakfast screaming let me go
i couldn't sleep off the vicodin
the tax returns were missing again
the lines i keep imagining on my face
are back and then
the inside of my mouth
is covered in sores
i'm scared to look too closely at my body
i see cancer cells and i smell burning hair and
i think i am rapidly depleting more each day
i think i am falling apart sometimes
like those weird dreams
where you lose all your teeth
i was mad at the fact that everything i was told to care about meant honestly nothing to me
a gpa, a resume, a transcript, a car, new clothes, a long line of people
to get into the show.
seems like everything the world has come to offer us
just takes us farther from human experience
and it has this way of making things that are obvious,
super complex.
we decided to brave the cold, and climbed out the kitchen window
she had jammed all the doors shut
because “they were slamming too much.”
I broke a glass on the way out, and left the pieces lying all over the floor
i am so goddamn bored.
the frozen streetlights melted into ice, colliding with the darkness
that kept us alive. we walked, eyes wide, i slipped at least twice-
i thought i could feel neurons exploding like stars a billion miles away firing
off their last breath and dying. after that i didn’t eat for a day, two, three
it became such an easy, technical way- to escape reality

A false taste of spring rests
heavy and clean in the back of
my mouth today.
It is December, so
I know the scent of wildflowers,
of insects hatching in droves
on her golden prairie,
is only a lie.

I have a feeling she would have loved
today with its blue skies
and soft air creeping quietly to
dusk, clouds purpling to black bruises
against the Christmas night.

There are names for what she was.
Unci.
Ina.
Wastelakapi.
Words only, not enough to tell,
never enough to tell
what the trembling
pound of buffalo hide beaten white
with drumming told,
the sob of the men’s voices as
they sang her home.

She is the last, they said,
she will be forgotten in long slow stages
by the young
who have no true notion
of their loss.
She will return sighing
to her golden prairie,
waning
like the bittersweet tang
of spring in winter.

Dedicated in honor to Cynthia, Edna, and Louise,
and to my own grandmothers, Arvadell and Evelyn Elizabeth

A Lakota student takes nitroglycerin pills when heart pains encompass her. “Like beating wings,” she says. “I live a strange lifestyle.” Not much younger than she, I listen in the silent space to my heartbeat. I nod when she challenges me with whippings she enduring by nuns at the boarding school, her eyes caressing the floor of the once army barrack’s room that serves as a classroom. The dense air welcomes ghosts. She lacks the memory of the offense, forced to lean over, to brace her moist palms on the nun’s desk, her behind becoming naked as the nun pulls down her panties. The dark eyes of the boys grow wider as they look askant at the horror played out on the pine floor in front of that makeshift altar, before television, before vibrations filled our minds with oblivion, before alcohol became escape, while other young girls, frozen in fear like does before a slaughter, kneel in rows beside them, the hems of their uniforms in arcs like crescent moons. The silence becomes like flour. I reach over to touch her hand, but the air between us lengthens. Nothing but shadows. My body becomes amorphous, fused with the Anglos of centuries. I too suffered whippings, but in woodsheds alone with my father, for speaking out of turn, for sassing back. The student and I talk about fiction, and I tell her that a woman in prison who calls up her sister for money and gets some, that alone is not a story. “Her story begins in Brazil, goes to Columbia, then Mexico,” she says. I agree with her that this imaginary cousin must change on this journey: “Yes, I’m sure she does, Theresa.” Her Lakota name, Wicaka.* “Like a shiny Christmas ball,” she says.
tells the truth

Well, we had some camera problems Friday night but we did get some of the poets on videotape.  So here is a link to our youtube site where they can be seen.

The podcast is not yet up at the Rapid City Public library's website but it is getting closer.

We will continue to work on  successfully taping more of the performances  for the future.
Posted by Kim R. Alarie at 2:29 PM No comments:

Friday night April 22, 2011 we had our spring poetry reading at the Rapid City Public Library. We had very good attendance and heard some very good poetry. If you have not attended one of our readings, watch this space for the announcement of our next reading.

High Plains Writers announced the winners of the 2011 poetry contest.

The Rapid City Public Library will host the podcast of the poetry reading from April 22 here.

As the High Plains Writer's contest comes to an end this Friday at the Spring Poet's Coffeehouse at the the Rapid City Public Library, another opportunity is open for poets. The South Dakota State Poetry Society is running their annual chapbook contest, open through June. See more information here: http://www.sdstatepoetrysociety.com/Contest.html
Posted by Jason at 10:55 AM No comments: 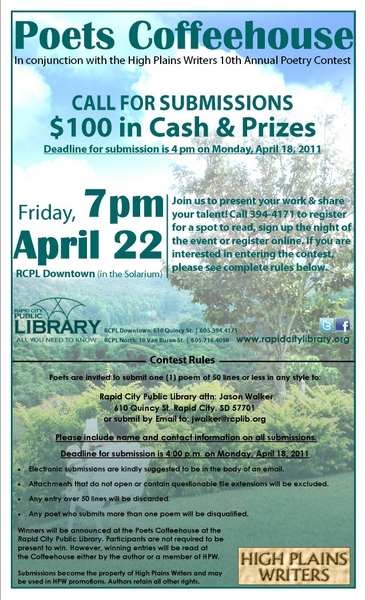 FOR IMMEDIATE RELEASE:
February 18, 2011
Call for Submissions
The High Plains Writers sponsors the 10th Annual poetry competition this April with cash and prizes totaling $100. The deadline for submissions is 4 pm MDT April 18, 2011.
Submissions may be sent by mail to: Rapid City Public Library
attn: Jason Walker
610 Quincy St.
Rapid City, SD 57701
Submissions will also be accepted electronically if sent to
jwalker@rcplib.org
.
The work to be considered should be included in the body of the email. Submissions sent as attachments will be considered only if they can be easily opened. It is up to the contestant to determine what can or cannot be easily opened. Submissions that are sent as attachments that do not open, open poorly or contain questionable file extensions will not be considered for the contest.
The requirements of the contest are: Each poet may submit a single poem of 50 lines or less in any style. Any submissions in excess of either rule will not be considered.

Judging will be done by members of the High Plains Writers.
Winners will be announced at the Spring Poets Coffeehouse held at the Rapid City Public Library on Friday, April 22, 2011 at 7:00 p.m. The Coffeehouse will feature poetry readings by those who sign up. Poets who wish to read their works should sign up at the Reference Desk at the Rapid City Public Library or online at www.rapidcitylibrary.org or by telephone 394-4171 beginning in April. Winners of the 10th Annual HPW Poetry competition able to attend will be asked to read their winning works. If the writers are not available, the winning poems will be read by members of High Plains Writers.
Posted by Kim R. Alarie at 1:12 PM No comments:

Mark your calendar for April 22, our Spring Poetry Event

Be sure to put April 22, 2011 in your calendar.  That is the date for our Spring Poetry event.  Join us at the Rapid City Public library for a poetry reading by local poets as well as the awards ceremony for the 2011 High Plains Writers Poetry contest.

This will be the 10th  annual High Plains Writers Juried Poetry contest.  Watch this space for  the call for submissions which will include all of the rules as well as the deadlines for the contest.
Posted by Kim R. Alarie at 9:08 AM No comments: