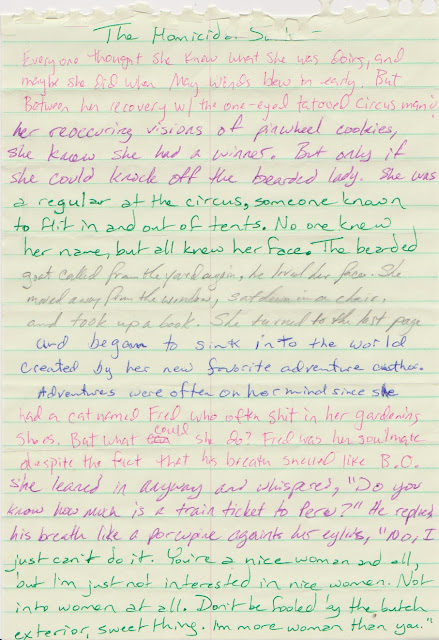 Everyone thought she knew what she was doing, and
maybe she did when May winds blew in early. But
between her recovery with the one-eyed tattooed circus man &
her re-ocurring visions of pinwheel cookies,
she knew she had a winner. But only if
she could knock off the bearded lady. She was
a regular at the circus, someone known
to fit in and out of tents. No one knew
her name but all knew her face. The bearded
goat called from the yard again, he loved her face. She
moved away from the window, sat down in a chair,
and took up a book. She turned to the last page
and began to sink into the world
created by her new favorite adventure author.
Adventures were often on her mind since she
had a cat named Fred who often shit in her gardening
shoes. But what could she do? Fred was her soul mate
despite the fact that his breath smelled like B.O.
She leaned in anyway and whispered, “Do you
how much is a train ticket to Peru?” He replied,
his breath like a porcupine against her eyelids, “No, I
just can't do it. You're a nice woman and all,
but I'm just not interested in nice women. Not
into women at all. Don't be fooled by the butch
exterior, sweet thing. I'm more woman than you.

This was a wonderful writing exercise. The premise is simple. Have someone write three lines, then fold the paper so only the last line is showing. Pass the paper to the next person with just that last line showing and have them write three more lines based on what they see. Fold it over with the last line showing and pass it along. Rinse and repeat until everyone has had a chance to participate. Then read the Frankensteinian concoction. The weirdness is pervasive and infective

The writing in purple is mine. I can't wait until we try this again.